The invasion of Ukraine by Russian forces has catalysed a broad fall in equity markets and investor sentiment. The human cost of the Ukraine conflict could be stark and extensive, making tough sanctions from NATO allies and other countries globally inevitable. Markets are already beginning to price in the inflationary consequences of the renewed surge in energy prices, particularly within continental Europe. The second-order effects of the next round of sanctions are unclear at this point. However, sanctions by their nature are also inflationary, which increase barriers to trade.

The market volatility so far this year has not all been driven exclusively by geopolitical risks and was initially caused by near-term inflationary pressures proving to be higher and longer-lasting than many. Responding to this inflationary pressure, central banks, including notably the Bank of England and the US Federal Reserve, have in recent months communicated a greater willingness to taper and end asset purchase programmes as well as raise interest rates. As a result, market expectations have moved aggressively to price in a rapid sequence of rate hikes this year. This backdrop initially caused investors to reallocate from growth into value investment styles. However, lately, markets have started to see the risk that an aggressive rate hike cycle might threaten longer-term economic growth more broadly.

We continue to judge inflationary pressures as primarily driven by factors that will fade as the year progresses. The pandemic has caused significant distortions to economies, with imbalances between supply and demand for goods and services and pressure on supply chains globally. However, we see signs that these imbalances are starting to moderate, and they are expected to continue to do so over the coming months, albeit from elevated levels. Therefore, we expect that the current inflation pressures will start to ease. As such, we see a lower interest rate path in terms of pace and scale than what is currently assumed by markets. This should allow risk assets, particularly growth equities, to see some relative recovery in sentiment in the months ahead. Consistent with this view, we are maintaining our asset allocation strategy of balance between growth and value investment styles at the current time.

We continue to see a longer-term constructive investing environment, with interest rates likely to remain low in absolute terms against a historical context and a maintained preference for equities over bonds.

Inflation has risen to its highest rate since the early 1990s. It currently stands at 5.5% as of January 2022 but could jump to as much as 8% in April this year when energy prices rise.

What Does This Mean?

A rise in inflation can mean consumers have less to spend on non-essential goods and services because more of their money is tied up in things like electric bills and food. For companies, it can increase what they spend on raw goods and what they pay their workers, which decreases profits.

The Bank of England has a target of keeping inflation at around 2% a year, where it has been for a long time. One way of trying to combat this rise in inflation is to increase interest rates.

On top of this, Russia has decided to invade Ukraine. Russia is a major oil and gas producer. While any war is likely to be localised, it may mean that there are further oil and gas supply issues if sanctions are placed on Russian exports, with Russia accounting for 30% of Europe’s gas supply.

Why Should I Care?

To try and keep inflation under control, Central Banks are looking to increase interest rates. This means the cost of borrowing for consumers increases, meaning mortgages and loans are more expensive. The same goes for companies as they borrow to finance new projects and developments. This can hit profits and share prices can adjust to reflect this. This means shares can go down in value, which is what we have seen since Christmas.

There are often periods where investment markets fall, and then subsequently recover. Over the long term, history shows us that investing in things like shares, bonds and property, provides us with superior inflation beating returns.

However, we will occasionally get periods where investments fall in value, which can seem scary. However, it’s important to focus on your long term goals. The reward for putting up with periods of uncertainty and risk, are returns above that available in cash.

It’s often tempting to want to switch out of investments to cash, and wait out the uncertainty until markets begin to rise once again. So why am I not recommending you do this?

The global economy has endured plenty of adversity over the decades, and yet the stock market has continued to climb, given time. The chart below shows that if you invested £100 in the FTSE All-Share in January 1997, it would have increased in value to £278 by January 2022. This is on a ‘total real return’ basis (combining share price changes and dividend income, and adjusting for inflation) and before fees. Conversely, if you had put £100 in a cash savings account, it would have grown to just £131 after adjusting for inflation. 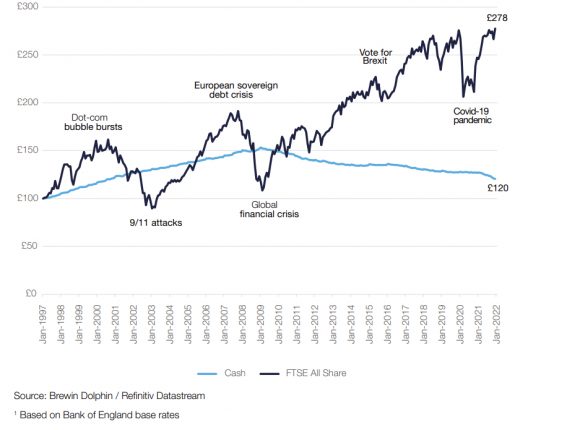 As the old investment adage goes, it’s about time in the market – not timing the market. This means committing your money to the markets and leaving it invested – for at least five years– rather than waiting for what you might perceive to be the best time to invest. The longer you invest, the greater your potential for making a profit. It doesn’t typically pay to hold off on an investment decision if you’ve got time on your side. After all, it’s impossible to know when the bottom of the market will be reached. There are plenty of factors that will impact this, and there might be further short-term pain. Yet trying to time the market, or cashing in, risks missing out on some of the market’s best days.

Investment markets often have periods of uncertainty. Our message would be to focus on the long term, and if you have any concerns, please get in touch and we can chat through these with you.